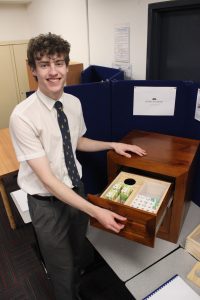 My major work called the ‘Hypo Station’ is a bedside draw organiser that assists those with diabetes. It provides a well-lit and organised space for crucial equipment that is needed to deal with Hypoglycaemia episodes during the night-time. I got inspiration to create this project through learning about my grandfathers difficulties in dealing with his diabetes. The Octa Case was designed to increase user ergonomics and maximise available workspace. It functions as a wall mounted computer case that is as a practical substitute for large desktops that obstruct and take up workspace. I was inspired by my hobby for designing and building custom made computers that meet the needs for myself or anyone else I am helping. I am overall satisfied with my major design project and have learned and developed skills such as 3D design, 3D printing, woodworking and intuitive problem solving. My Major Design Project is a portable illustrating workspace that provides the user with a back-lit worksurface, as well as a detailed storage system of pens, pencils and paper, all combined neatly inside a timber case. Being a Design and Technology student, it is frequently required that I traverse between locations of work with a vast range of tools that are needed for my jobs, thus my product provides a compact portable option to this workspace setting. This product is completely internally powered, and is primarily built to provide security and an assurance of the user’s stored item’s safety, allowing the user to use the product wherever, whenever, and for numerous illustrating applications. 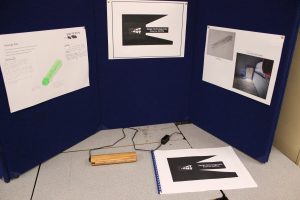 My major design project is an easy-to-use nightlight aimed toward the older generation. My inspiration towards producing and manufacturing the Nightlight is after leaning how many people aged 65+ suffer from injuries from falling in after dark hours. This unfortunate event is one of the leading causes of death in older adults and I thought this is unacceptable. The Nightlight is aimed to fill this need and reduce the occurrence of these falls. This system has been developed in order to create an alternative way for households to generate power through already existing movement. The movement found within your pipes when you use any water. The idea behind it is that before the water comes out of your taps it will travel through this system which has multiple generators, the power generated will be connected straight into the household’s battery reducing any electricity bills. If the system managed to produce enough power to charge the entire home any excess power will be sent straight back to the grid, and you will be paid for it.

The inspiration behind it was trying to create a new means in which people could reduce the amount of electricity required without any additional work. Out Of Sight Out of Mind – James Morten

My project “Out of Sight Out of Mind” is a spatially efficient wall mounted box that has a door that pairs as a work bench when folded down. When folded down the box opens and exposes an array of storage systems such as 50 in 1 screwdriver kit to an intricate box system and peg board. Thus, providing to the consumers and or target market an opportunity they didn’t have before. The No Brainer No Brain No Pain – Joshua Brown

I constructed a device used when doing boxing training that prevents the head from bending back beyond a safe limit.