Corum Deo (In the Presence of God) This triptych work discusses medicinal and spiritual healing, through the lens of my personal journey with Chronic Urticaria or Hives, a skin condition agitated by heat. In the past two years I’ve gone through dozens of types of antihistamines and injections, which encouraged me to reconnect with faith and religion. From left to right, the panels embody biblical imagery from instances of meeting God within the books Ezekial and Exodus, where he spoke to them through the wrath of the angel and ocean, then gently in the burning bush. The landscapes used reflect national identity: Asian waves upon an Australian coast scattered with coastal Gazania Rigens flowers, and the sandstone caves, eucalyptus, and gums of the Australian bush.

The middle panel appropriates the famous Ukiyo-e woodblock print ‘Great Wave off Kanagawa’ by Hokusai and was inspired by European allegorical landscape painter Casper David Friedrich with his painting ‘Monk by the Sea’. The painting incorporates Surrealist, Impressionist and Baroque stylings to reflect a multifaced influence of styles on contemporary artistry, as well as that of Australian culture in general as a mix of Asia pacific and European. The medications in each frame and their placement indicate this journey to finding balance. 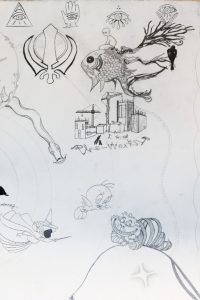 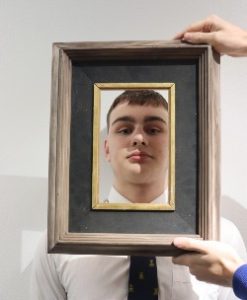 An allegory of visionary theology

My large-scale, monochromatic pencil drawing explores concepts involving the ignorance of human persistence when seeking for more, and the ambiguity of looking to religion for assistance process.

It further scrutinises the subsequent futilities and ineptitude of the process, exhibiting a negative perspective of the concept, contextualised with theological/mythological symbolism and psychedelic stylistic features in the absurdist genre.

I would like for my audience to approach my ambiguous artwork with their own ambiguity, and hopefully adopt a more conceptual approach to religion, opposed to their religion’s fundamentals. My artwork is about capturing the fractiousness of urban life. Through COVID we were exposed to the emptiness in the absence of human interaction, my work uses deep, contrasting colours to capture the chaotic energy which we can once again see in everyday life. My artwork draws inspiration from Marcel Duchamp’s cubist works, through his ability to capture movement using colour, line, and tone on a stationary canvas. My artworks are comprised of oil paint and acrylic paint on canvas, as well as pastel on paper. My works are made to show an audience how the presence of life and movement can drastically change the composition of our environment. 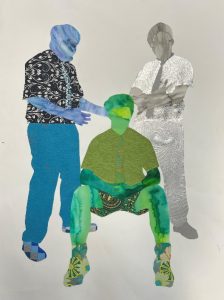 My artwork Famiglia explores the idea of close friendships and how they can be like family, with reference to my Italian heritage in the title of my work as family plays a major role in Italian culture. Using the medium of collage and water colour, I filled drawings of my friends with collage and water colour to represent diversity and difference. I chose various patterns to demonstrate diversity within my artwork and to keep the audience engaged. My work has been influenced by Pablo Picasso’s cubist work. 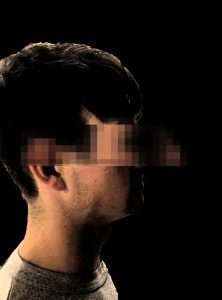 Censorship is an ongoing issue which has affected artists throughout the years, censoring artworks which are deemed as insensitive or problematic. The reason I believe censorship is a problem, is that findings showed that censoring, regardless of how appealing the censor was, changed the potential audience’s opinions towards

the stance that the message would espouse and increased their willingness to hear it. The Artist which influenced me was Ai Weiwei as he has been actively censored but still managed to create art from the negative situation. I used Photoshop to craft these artworks from portrait photos I took of my mates. 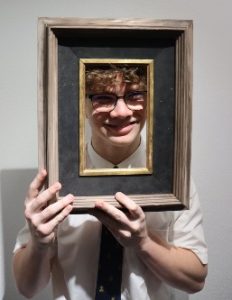 My interest in anime can give me an insight into how it feeds over into popular culture, many of my works are dominated by text which is a post-modern construct. I have been inspired by Basquiat, Eiichiro Oda and Kentaro Miura. Through their works I have been able to create a mix of the two styles of drawing/animation and words being used in art. 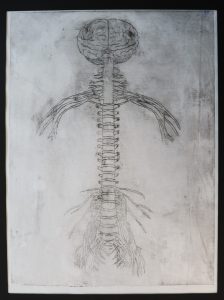 My concept revolves around my personal experiences with obsessive-compulsive disorder (O.C.D). The work is an in depth is an exploration into the complex anatomy of the human mind. The work is a direct visit into a part of my own conscience and memories that the audience will witness in the eight-piece work. Each separate print is a step into cyclical nightmarish nature of the seemingly endless repetitiveness journey. However, in this melancholy atmosphere realisation is found granting acceptance and sanctity.

Daria Golab is a post-modern illustrator and graphic designer who portrays her personal experiences through her classic black and red style. Golab’s composition, imagery and colour is expressed in my works as I use bodily imagery and similar use of colours. Jean-Michel Basquiat provoking approach to his works I have manifested in my intense imagery such as eyes, which capture the audience attention and cause uncomfortable sensation. 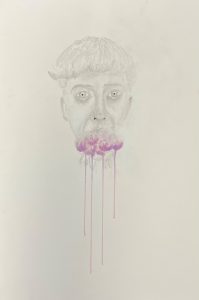 Boys Will Be Buds

The multidimensional construct of masculinity has often been reduced to its turbulent nature within the social development of young men, subsequently cultivating the social phenomenon of toxic masculinity. My artwork aims to comment on the diverse range of emotional control and maturity seen within boys, and how this binds us together in a very niche way. Employing lead and charcoal as a means for my portrait, the subtly in tone work elevates the gentleness not often emphasized within the faces of young men. However, the contrast of acrylic splashed amongst the flowers accentuates the noise shrouding the identity of these boys in often aggressive or counterproductive manifestations. Vernon Ah Kee’s tone work within his own portraits have been a great inspiration for my own work, utilizing his emphasis on identity as an appropriated focus within my own work. Loneliness, at times, can be comforting if chosen. My photographs follow a character choosing to be alone as he explores different places, incorporating my love for music with a Spotify QR code linked to a different song on each work. These songs are all by the artist The Weekend and I believe they reflect the mood of each work. My artmaking was influenced by artist Barbara Kruger, edited in a similar fashion with a word or two across each work. The words across each work are the titles of the song that is linked to the QR code. My artmaking was also influenced by the photography associated with the album Trilogy by The Weekend. 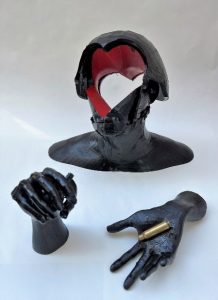 Major Wars are unheard of in the western world today. We read about conflicts from the safety of our homes. When war does come around, how will you respond? My artworks’ concept is one of humanity, peace, and our perception towards conflict today. It incorporates themes of war, the human condition, and the psychology of war. When the first images of captured Russian soldiers reached the news feed, my first reaction was too how young the soldiers were, barely older than some students here in Australia.

I wanted to take a more human stance towards the soldiers of this conflict. People don’t want to fight their neighbour and my artwork represents those feelings of fighting for something you don’t believe in. To reflect this human aspect I wanted to appropriate the works of Michealangelo’s sculptures. My work is heavily influenced by Stanley Donwood and Rosalie Gascoigne through their ability to connect with the audience through symbolism within their works. The work reflects modern day society and the disorderly nature of society through key words that are highlighted through individual experiences. The disorderly nature of society is reflected in the arbitrary words highlighting the bright coloured boxes. All my works involve the concept of randomisation and exploration of materials. The general theme of the drip let me explore what materials I can explore and drip onto the canvas of my works. Heavily inspired

by Jackson Pollock and his ‘drip painting’ technique, I learnt to be able to let the paint drip and do what it does and not concern myself with ‘perfection’. I then linked the work back to Ancient Greek’s with the ‘encaustic painting technique’ or ‘hot wax painting’. This idea was inspired by Japser Johns as he painted with the encaustic technique as a modernist artist. I also explored mixing paint with different materials. I mixed paint with just water and with hand sanitizer as they provided different textures, dripped differently and the paint staining on the canvas changed. I also mixed sand with water and paint in one of my works to explore a completely different texture. Living on the Northern Beaches, the soles of your shoes are usually filled with sand but, putting it in an artwork is something I never considered until my exploration of materials. It really helped me appreciate the world as art and how with a little bit of exploration, ideas can evolve. 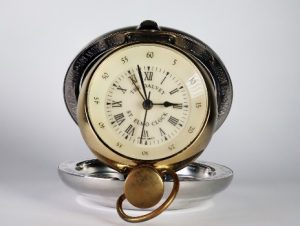 It’s All in the Detail

My work … is a series of macro level explorations showing the evolution of technology. These images were created with the intention of being reproduced on a very large scale giving the viewer an opportunity to see these objects from an unfamiliar perspective and style. The images can point to a sense of nostalgia for those who used these objects when they were popular. My work was influenced by Peter An- drew Lusztyk and his series called “Collectable”. His works gave me the idea to use old objects and print them on a large scale. He also taught me the Photoshop technique of focus stacking which allowed me to get the ultra-detailed images. I have also been able to engage the audience’s imagination by making modifications to the images. 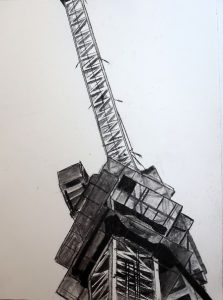 The concept for my BOW is to draw attention to the integral part that cranes play in the industrialisation and development of modern civilisation. Often overlooked, they are essential in industrial construction and prove to greatly impact development throughout the world. The use of charcoal on paper largely allows me to create dramatic tones and draw attention to the forms of the cranes, communicating their significance often unnoticed by communities, earning them the status of pillars of modern-day creation. My works were highly inspired by Yang Yongli- ang, using monochromatic tones, creating shadows and layered forms to convey depth and perspective.