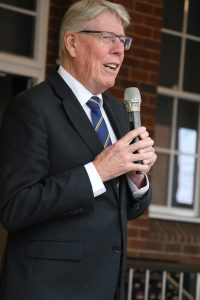 It was announced by Dr Craig Wattam, Executive Director of Edmund Rice Education Australia this morning that after twelve years of outstanding leadership and dedicated service to the St Pius X College community, Mr John Couani will conclude his time as Principal of the College at the end of the current school year. Dr Wattam acknowledged that Mr Couani’s “contribution to the St Pius X community has been immense. He has not only overseen the transition from the leadership of the Christian Brothers to lay leadership but has also been instrumental in building upon the College’s excellent reputation in the local and broader Catholic community. Under his stewardship, College enrolments have never been stronger and John has been passionate in his desire to see all young people experience success in their lives.”

Mr Couani also wrote to the College community emphasising that he felt “enormously grateful for the opportunities of teaching and leading in Catholic education, and it has been a true privilege for the past 12 years to lead St Pius X College as its Principal since 2011. The College community is extraordinary and without doubt the students, staff and parents are exceptional and I will sincerely miss the community that is such an integral part of my life.

It has been a most rewarding privilege to lead this outstanding Edmund Rice school and it is only fitting for this announcement to be made on the Feast Day of Blessed Edmund, 5 May. I sincerely thank all the Christian Brothers who have served this College since 1937 and left the wonderful legacy that I have endeavoured always to continue.”

John Couani has had a long and very successful career in education. He started teaching in 1977 at Marist Sisters’ College in Woolwich and also worked at Marist College, Pagewood and Brigidine College in Randwick. In 1987 he became the Assistant Principal at St Brendan’s College in Yeppoon in Queensland (a Christian Brothers’ school). He later returned to Sydney to take up the role of Deputy Principal at St Patrick’s College Sutherland, another Christian Brothers’ school.  John then moved into more senior roles in Catholic Education; firstly, as Principal at De La Salle College in Kingsgrove and later at Holy Spirit College in Lakemba. In 2002, Mr Couani became a senior Regional Consultant with the Catholic Education Office in Sydney and was the Regional Director in the Eastern Region from 2006-2010. Mr Couani commenced as the first Lay Principal of St Pius X College in 2011.

Mr Couani made a point of thanking the many people who have supported him over the years.  He has been a popular and dedicated Principal, a man of sincere Faith and commitment to education.