Since 1983, some 1,000 Year 11 students from the College have completed the annual Snowy Mountains hike from Round Mountain to Thredbo. At the end of this 100 kilometre trek the boys are happy to relieve their aching legs and shoulders and take the Kosciusko chair lift down to Thredbo village. There is a memorial plaque at the lift to Chris Pegus who suffered a fatal accident on the mountain in 1989. Chris Pegus was a student at St Pius X College from 1970 until 1977.

The Pegus family has a strong connection to the College. Chris’ brothers, Brian, John and Steven, also attended the College. John Pegus’ sons, Oliver (Year 10) and Jamison (Year 8) also attend the College. The Chris Pegus Memorial Trophy for Swimming is presented in Chris’ honour at the annual Year 12 Graduation. Chris was passionate about sport. He was Captain of the School Swimming Team and Vice- Captain of Barron House – constantly promoting his swimmers at school assemblies. The annual swimming trophy is a fitting memorial to his life.

Chris Pegus studied Civil Engineering at Sydney University, later working on such significant sites as the construction of the Tomago Aluminium plant in Newcastle. He loved the mountains, so it was natural he should take the opportunity to move to Thredbo as a Project Engineer for the expansion of the village. While there, he was appointed Chief Project Engineer for the 1989 World Cup.

On Wednesday the 10 May 1989, Chris lead a team from Channel 9 and Telecom to review the setup for the communication links for the television coverage of the race. Tragically, Chris fell from the platform of the Ramshead ski lift. Poor weather hampered his rescue. He died at 1:50 pm in Jindabyne Surgical Centre: a devastating loss to his family and friends. Chris was just 29 years of age. Over 500 people attended his funeral Our Lady of Dolours Church. The service was performed by family friends Fathers Tom Knoles and John Kingston. NSW Police Highway Patrol and Motorcycles escorted the funeral procession to Davidson Cemetery. Chris’s mates from Thredbo conduct a memorial ski race each year on the first week in September in celebration of his life.

Local Thredbo identity Reggae (John) Elliss knows the Pegus family well. Reggae Elliss graduated from St Pius X with Steven Pegus in 1976. Reggae lives in Thredbo and MCs the Pegus trophy presentation. Reggae’s brother, Glen, graduated from the College in 1980, the same year as John Pegus. Another brother Steven Elliss was also at the College and left to take up an apprenticeship after completing Year 10 in 1974. The Pegus and Elliss families were part of the strong Forestville community which centred around Our Lady of Good Counsel church and primary school.

Reggae Elliss has had a long and successful career in surf and ski reporting and publishing. He owns and runs the Rip Curl shop in Thredbo and publishes Chillfactor magazine. Reggae won the inaugural Pegus downhill himself. Young Oliver Pegus has won the Junior race in 2015 and again in 2019 in memory of his uncle. It is good to know that the connections made in school extend long after the boys have graduated. Many people from the College have worked, hiked and skied in the Snowy Mountains. It is fitting that we remember one of our own community who lost his life in a place that so many of us know and love so well.

David Bradley has had a long association with the College. He started in Year 5 in 1945, at what was then called Christian Brothers Chatswood (CBC) in the last year of the Second World War,  when many ex-students were serving overseas. He continued until the Leaving Class of 1951 – although health reasons led the family to enrol him in boarding school at St Patrick’s College in Goulburn in 1948 and 1949. David maintained a long association with the church and the College after he graduated. He and Austin Sheath were instrumental in starting the first Old Boys Union and organised the 25th Anniversary dinner in 1952. David maintained many friendships with the class of ’51 and organised their 50th reunion in 2001. Another strong connection was his long friendship with the Brothers, especially the legendary  Bernard Carter, College Headmaster from 1948 to 1953. Brother Carter was instrumental in establishing the College as a senior school by ensuring there were adequate facilities for Science Laboratories. These were first established in old ex-army huts purchased for the school just after the Second World War. In addition, David has kept a strong association with church affairs through a long membership, covering some 60 Years, of the Knights of the Southern Cross. David became a Chartered Accountant and had a long, and successful career specialising in  Insolvency until ill health forced him to retire in 1983.  David has been a great supporter of the College attending many functions, particularly ANZAC and Remembrance Day ceremonies of recent years with his close family friend of many years standing Miss  Lesley Adams. David’s suggestion for a commemorative site to ex-students in the defence forces indicated his deep commitment to acknowledging the contribution of the College community in time of war. Both David and Lesley were present at the 2019 Remembrance Day Ceremony and David was able to address the students about his association with the College. 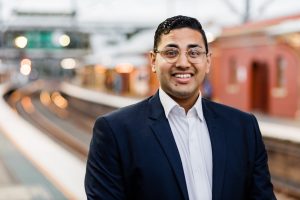 Daniel has been on quite a journey since graduating from the College in 2013. He completed a double degree: Bachelor of Mechanical Engineering/ Bachelor of Commerce at The University of NSW in 2019. He won a scholarship with Transport for NSW (TfNSW) and worked across the Transport Cluster from 2015 to 2019 as a scholar and in 2020 as a graduate. His roles included working as a Mechanical Engineer, Tunnel Technology, Motorways – Roads and Maritime Services (4 years). As part of his Engineering Degree he wrote a thesis on Road Tunnel Ventilation linked to his work in Tunnel Technology on the North Connex tunnel in Sydney’s north.

Daniel has also been on a fascinating Faith journey. He had been involved in his local Parish at Ryde-Gladesville, leading the music ministry for the 6pm Mass each week as well as youth ministry groups. Daniel wrote: I’ll be honest, my faith dwindled for a number of years, especially around the 3-year mark at university. I had reached a low point but this was also the point at which I experienced a profound re-conversion whereby the faith and my relationship with God became personal and meaningful. It is hard to express this with words, and it’s certainly not something that can be found in a textbook, but this particular experience changed everything in my life. I was eager to learn more about the Catholic faith, to deepen my relationship with God and eventually discern where God is calling me. For so long I had imagined the future might look like: graduate university, get a job, get married, buy a house, have children, etc. However, one day in my final year of university I realised that at the end of my degree I could do anything; and someone asked me the question well what do you think God has planned for your life? And so I asked the question and at least 20 people asked me similar questions like “Have you thought about the priesthood?” . At the same ..time, the Archdiocese of Sydney was setting up its first House of Discernment, called Sumner House (located in Lidcombe, NSW}. It was a house for young men to live in community and discern where God is calling them in their Vocation, whether it be marriage, priesthood in September 2019 and lived with eight brothers. The house provided support in terms of formation, brotherhood and fostering our identity as men of God to gain the freedom to choose the next step in responding to God’s call. I applied for the Seminary in November 2020 after discerning that my best bet is that God is calling me to be a priest, still open to wherever God may lead me in the future. I am very grateful for the education that I received at St Pius X as it has shaped who I am today and laid the foundation for my life: Fide et Labore. It’s heartening that there are good young men graduating into the world having received such an important and fruitful formation.

Michael Rodgers, who is in the seminary with Daniel is the nephew of Mr Pat Rodgers, History Coordinator at the College. Daniel was a fine young man at school – a real asset to the College. We wish him every success for the future. 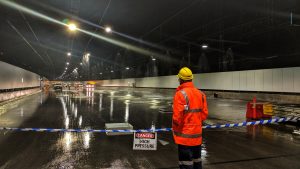