Entertainment, Media and the Arts

Born in Budapest, Gabriel grew up in post-War Europe, and after fleeing Hungary with his parents during the Revolution in 56, he went to school in Austria before arriving in Australia as a teenager where he attended St Pius X College Chatswood.

As a lawyer with a passion for history and archaeology, Gabriel had to wait for many years before being able to pursue another passion—writing—in earnest. However, his love of books and storytelling started long before that.

Gabriel holds degrees in literature and law, speaks several languages and takes research and authenticity very seriously. Inquisitive by nature, he studied Egyptology and learned to read the hieroglyphs. He travels extensively and visits all of the locations mentioned in his books.

Along the way Gabriel also developed shopping centres and built a chain of 100 shoes stores.

To find out more about Gabriel visit his website http://gabrielfarago.com.au/biography-gabriel-farago/

Dr Kevin Hunt, who was at St Pius X College from 1971 to 1978, is now a lecturer at the Sydney Conservatorium of Music. He is also one of the top jazz musicians in Australia. His musical career started first with his family (his father played organ at Our Lady of Dolours Church) then developed through his time at the College, which he recalls as being crucial in his musical development.
He pays great tribute to the “incredible” Band Master at the time, Keith Kellett. (The Keith Kellett Award for Leading Band Member in Year 12 is named after him.) According to Kevin, Kellett had great musical sense and gave key advice to his charges: “to relax and listen when you’re playing”. These were pioneering days for music at the College. The backbone to this development was the coordinator, John Sparkes, supported by many others, including Brother John Mooney, a Maths teacher and violinist who was instrumental in the development of the Brass Band. Other standout teachers, Kevin recalls, included the irrepressible Paul Flannagan, himself a performer and a talented teacher of English. Mrs Bronwyn Hessian taught Economics to Kevin at the College and has maintained a long friendship with him as her own career led to her  eventually becoming an Inspector at the Board of Studies – where she worked with Kevin’s brother-inlaw and fellow ex-student, Andrew  Goodyear (SPX 1973). The school had co-instruction with Mercy College in the 1970s. Kevin also recalls the “sweet” sound of young Sister Joan Doyle, who also accompanied the choir at the church. Kevin maintains his passion for social justice through his work with the homeless and indigenous people in the centre of Sydney through such programs as the Reconciliation Choir.
Kevin shares this passion with his  older brother, John, who left St Pius X in 1972 and returned as Board Chairman from 2006 to 2011. Both John’s sons attended the College. Graham (SPX 2001) is now a musician and teacher while Brendan (SPX 2004) has just become a Qantas pilot.  Their other brother Bernard (SPX 1976) conducts a very successful wholesale nursery at Taree, which was badly damaged by fires in November 2019. Kevin Hunt is not the only ex student at the Conservatorium. A number of our talented musicians have attended there over the years. Kevin has returned to play at the College on occasion, the place where he first experienced the magic of communicating with an audience through music. His latest CD “Hothouse: Live 2018” was launched on Monday 3 February 2020. Amongst the audience was his Economics teacher, Bronwyn Hessian, still maintaining her interest in one of her favourite students from the College. 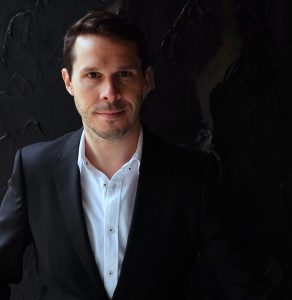 David Greco (Class of 1999) was the middle of three brothers who attended the College (the others being Anthony 1996 and Matthew 2004). David was a talented student , vocalist and actor who has gone on to great success as a performer. He sung on many occasions at the College and played the role of Bird boot in The Real Inspector Hound with great style in 1998. Graduating with an impressive TER (now known as the ATAR) of over 97, provided the opportunity for him to study in a variety of professions but he followed his passion for music and performance and went on to study at the Sydney Conservatorium of Music. He does not regret his decision. David has sung on some of the finest stages across Europe and has appeared as a principal in the world’s most exciting opera festivals including Festival Aix-en Provence and Glyndebourne Festival Opera.

In 2014, he became the first Australian appointed to a position with the Sistine Chapel Choir in the Vatican, Rome.
David regularly appears as a soloist with Australia’s finest ensembles and orchestras, such as the Australian Brandenburg Orchestra, Australian Chamber Orchestra and most recently with the Sydney Symphony in their Helpmann Award-winning concerts of Bach’s cantata for bass, Ich habe genug. In 2017, he was a principal artist with Opera Australia, appearing in The Eighth Wonder and The Love of Three Oranges, and received critical acclaim for his appearance as Seneca in Pinchgut Opera’s production of The Coronation of Poppea.

David’s solo recordings include Poems of Love & War, and in 2019, his first recital album, presenting works by J S Bach, with the Netherlands-based Luthers Bach Ensemble on the European label Brilliant Classics.

David is an active researcher into historical performance of 19th­ Century voice and recently received his doctorate in this field from the University of Melbourne. His PhD led to the first Australian recording of the historically informed performance of Schubert’s songs cycles Winterreise and Die schone Mullerin on the ABC Classic label – the latter receiving an ARIA nomination for Best Classical Album in 2020.

David recalls his time at the College very fondly. In his own words it ‘served him perfectly’. He appreciated the ethos and the supportive community, as well as the opportunity to appear on stage. The experience of acting in the Hound helped him to find his ‘theatrical feet’ and contributed to his movement into the field of Opera which combines both acting and musical performance. David’s brother Matthew has also gone on to become a professional musician, also continuing his love of music into his career. Alex Lewis has just been employed as an on-air reporter with Channel 7 in Brisbane. Alex arrived at the College in Year 7 in 2008 and was highly involved in College life. He particularly recalls Year 11 English and the topic ‘The Beat Generation’ with the works of Kerouac and Ginsberg amongst others. His main interest throughout his time here was in Music. He was a very talented violin player and played in a number of string groups including the excellent String Quartet. He also performed with the choir. His other activities were debating and one season in the Third XV Rugby where he fondly recalls the one tackle he managed to make in Bathurst. One of his most memorable events was the Snowy Mountains Hike in 2012. He loves the mountains and cross country skiing was a great interest outside the school life.

After school Alex continued, his love of the mountains by spending several months with his close friend Max Enthoven (SPX 2013) working in Karee la Restaurant in Thredbo throughout the winter. After travels overseas Alex settled into studying journalism at UTS. He also had internships at 2GB and the North Shore Times and one at Channel 7 in Sydney led to him being offered work at that broadcaster as their Social Media Producer and a Producer with Weekend Sunrise in 2016. It was hard to balance studies with work, especially when one Friday afternoon he was unexpectedly offered work as a regional reporter in Queensland with the Seven Network. It was a great opportunity but he had to be ready to go the following Monday!

Alex ‘took the plunge’, and went to Mackay, up in the Tropics between Cairns and Rockhampton, in crocodile country- a far cry from Sydney and the Snowy Mountains.
It was a big decision forcing him to balance work with finishing his degree at the Open University. After six months he moved to the Gold Coast and then in December 2020 the Seven Network moved him to Brisbane where he reports on all manner of things including crime, councils, state politics and natural disasters.