Director NRAO Anthony J. Beasley (Class of 1982) is Director of the National Radio Astronomy Observatory (NRAO). After receiving his Doctorate in Astrophysics from the University of Sydney, Tony joined the National Radio Astronomy Observatory (NRAO*) as a Postdoctoral Fellow before being appointed Deputy Assistant Director in 1997 and then Assistant Director from 1998 to 2000. He has also held positions at Combined Array for Research in
Millimeter-wave Astronomy (CARMA), as Project Manager for the Atacama Large Millimeter/submillimeter Array (ALMA) in Chile, Chief Operating Officer and Project Manager of the National Ecological Observatory Network (NEON) and is now the Director of NRAO. 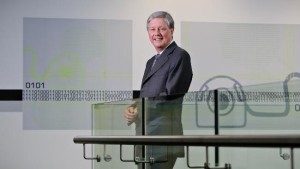 David is an Australian electronic engineer and computer scientist credited, along with colleagues, for the first chip-set implementation of the IEEE 802.11a wireless networking standard.

He is credited with a number of important technology innovations. developed with colleagues which include John O’Sullivan, Terence Percival and Neil Weste, and in particular the first chip-set implementation of the IEEE 802.11a wireless networking standard. This innovation has been described as a revolution in world communications, allowing high speed wireless communications.

Skellern was appointed to the Order of Australia in 2010