Patrick Bollen Awarded Oam In Queen’s Birthday Honours List 2020. Congratulations to College ex-student Patrick Joseph BOLLEN who was awarded the Medal of the Order of Australia OAM in the Queen’s Birthday Honours List. Patrick, nicknamed in Sailing Circles “Ten Pin”, graduated from the College in 1967. He was the Drum Major in the excellent Military Cadet
Marching Band which included Bill James who went on to considerable success with Top Deck Travel and is a great supporter of the College. The successive Drum Major, Dave Nesbitt, is a professonal musician living in Cairns. The band won many competitions including the Cadet State Band Championship in 1967 and led many parades around the North Shore.
Patrick’s award was for service to the community, and to sailing in particular.

Professional
» Managing Director, Patrick Bollen Marine.
» Sailing Broadcaster and Journalist.
Patrick is an accomplished Marine Artist and has painted many famous yachts of the Rolex Sydney to Hobart including Ichi ban, Wild Oats, Patrice and Alive. 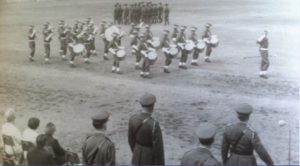