PLAY RUGBY FOR BROTHERS IN 2023 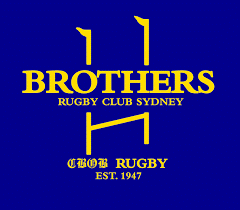 Brothers was established as the St Pius X College Old Boys’ rugby club in 1947 and 75 years later we are still running around on Saturdays at our home ground at Roseville Chase. We have always been a club that sees rugby as a social outlet as much as it is a sporting one and while we exist for anyone to join, we are always looking to reinforce our connections with the school so that new generations of Old Boys can enjoy playing and socializing with their schoolmates long after they leave St Pius.

After the ravages of COVID we are now looking to expand. In 2022 we added a Colts (U/21) team and in 2023 we are looking to add a Womens Sevens team to the club. So what options do you have to become part of 75 years of tradition and begin writing the next 75 ?

Classes of 2019 and prior: Bring along some mates and pull on the boots in seniors.

To encourage people to play for Brothers we are also now able to offer several small, competitive educational scholarships for those aged Under 21 as at 1/1/23. Two of these are set aside for players who attended St Pius X College.

For all your enquiries about joining Brothers Rugby in a playing or non-playing capacity please contact our recruitment manager:

You can also keep up to date with us on Facebook – Brothers Rugby Club Sydney    https://www.facebook.com/brothersrugbyclubsydney Cheers to the old boys that lent a hand Saturday 8th May for our first BBQ back following a restricted COVID footy season last year. The class of 1986 represented by Roy Callabrissi, John Preston, Paul Avery, Craig Lightfoot and Jeffrey Clarke.

There are five more Saturday home games in the calendar. For any fathers that may be SPX old boys, take the opportunity to catch up with some class mates and show your support to the school.

The College’s Number 1: Chaplin Oval, now located at the Treacy Centre, Oxford Falls, is named in honour of Mr Chaplin’s family and their work in developing the facilities of the school.

Mr Chaplin’s father, Mr Arnold Chaplin, himself an old Boy of Waverley Christian Brothers College, was instrumental in surveying the original Chaplin Oval at Mars Rd Lane Cove in 1948. In 1949 he and other volunteers prepared it for use by the students of the then Christian Brothers College Chatswood (subsequently named St Pius X College in 1954).

Mr Phil Chaplin and his classmates V. O’Neill, T Cunningham, G Casey and B Hadley toiled selflessly over the school holidays to assist the Brothers to lay drainage pipes, clear, level, and lay the soil on which generations of students were to host countless Rugby and Cricket fixtures against opposition including our brothers from St Patrick’s Strathfield. The Mars Rd Lane Cove Chaplin Oval was in commission until 1992 when the College’s sporting facilities, including Chaplin Oval, were relocated to its present location. Mr Chaplin enjoyed a long career as an Industrial Chemist and his three sons, Vince, Ross, and James (’82) also attended the College. Subsequently Vince’s son Jarryd attended St Pius in the early 2000s before home schooling on the ATP World Tennis circuit.

With the passing of Mr Phillip Chaplin the College pays due deference to those, such as Mr Chaplin and his family, who laid the strong foundations from which the students of the College benefit today.

SPX Class of ’71 (1962-71) 50th Anniversary Reunion Update.
Plans for the reunion are going well and thanks to everybody who has helped with getting in contact with former students. We are spread far and wide both nationally and internationally, and the various crises make it difficult for some to attend.
The planned reunion is at the Great Northern Hotel, Chatswood on Friday 8th April, 2022 from 6pm.
A marquee in an undercover area of the hotel’s beer garden will be set up where we can initially meet.
Food and drinks can be ordered at the bar inside the hotel.
For further details, contact Mark Fenton-Jones at [email protected] or via Facebook.
Friday 8th April 2022
at 6PM
Great Northern Hotel
Put it in your diary
Adrian Davis
0407 273 418 To stay up to date with the St Pius X College Old Boys Association please subscribe to our newsletter and join the OBA Facebook group.